History of the Netherlands and Flemish movement

The Netherlands in the medieval period 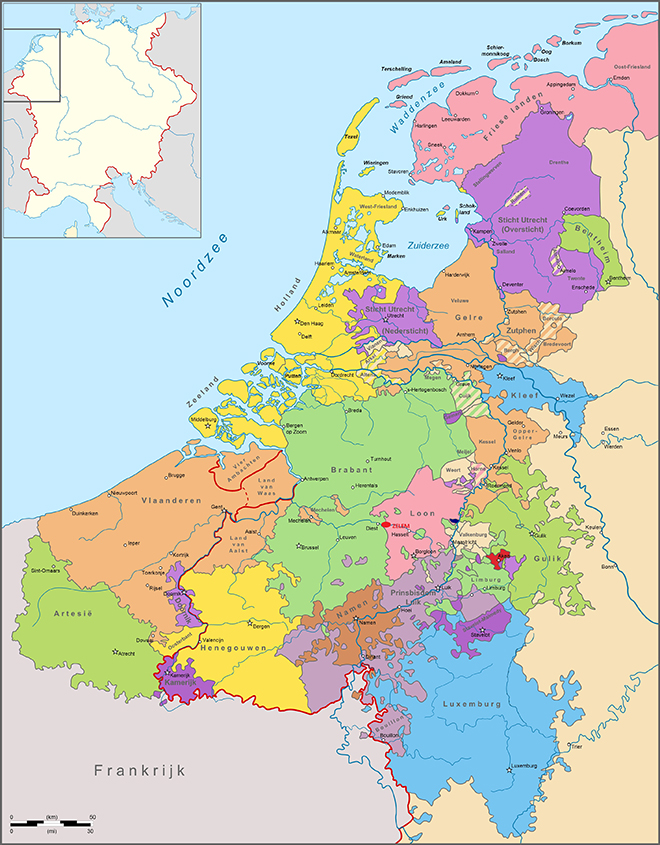 The historical Netherlands exists out of several counties formed during the middle ages. The best known are the county of Flanders, Brabant, Holland, Zeeland, Friesland, etc. These counties were bounded together by a same culture, languages and people (there were also Walloon counties).
Before the 16th century they were part of greater empires like the Holy Roman Empire of Germanic States and the county of Flanders was even a long time occupied by the Empire of France.
Not to be mistaken, the historical medieval Flanders is not the same as today’s Flanders. Both have the same flag and symbol (Flemish lion) but medieval Flanders forms only two provinces of today’s Flanders. After Belgium became independent from the Netherlands and the Southern Dutch people start their cultural revolt against that French state the Southern Dutch people took after a while and by chance one symbol, the Flemish lion, to unite all the Southern Dutch people (the three historical counties Flanders, Brabant and Limburg)

The Netherlands united (16th century) and back splited up 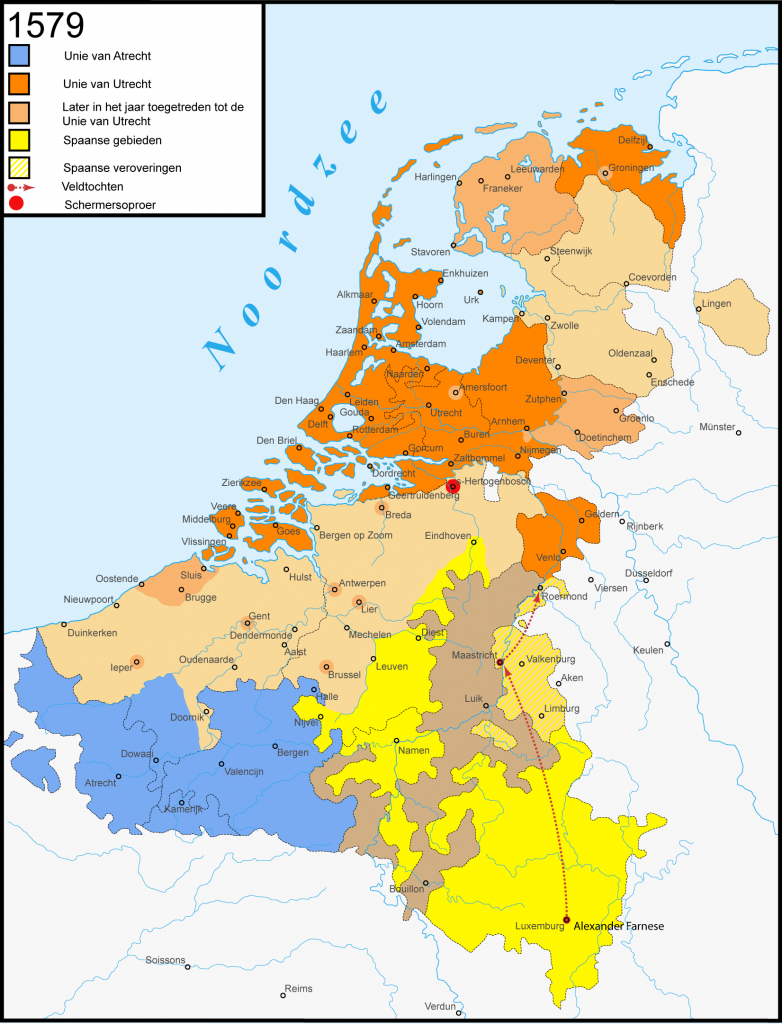 During the 16th century all the counties of the Netherlands became part of Spain (House of Habsburg). Something that the Dutch people didn’t liked and they started a rebellion leaded by Willem van Oranje (father of the fatherland) against the Spanish rulers. On the 26th of July 1581 the Dutch counties signed the ‘Plakkaat van Verlatinghe’, the declaration of independence of the Netherlands. All the Dutch speaking counties where united and formed a Republic of confederated states. 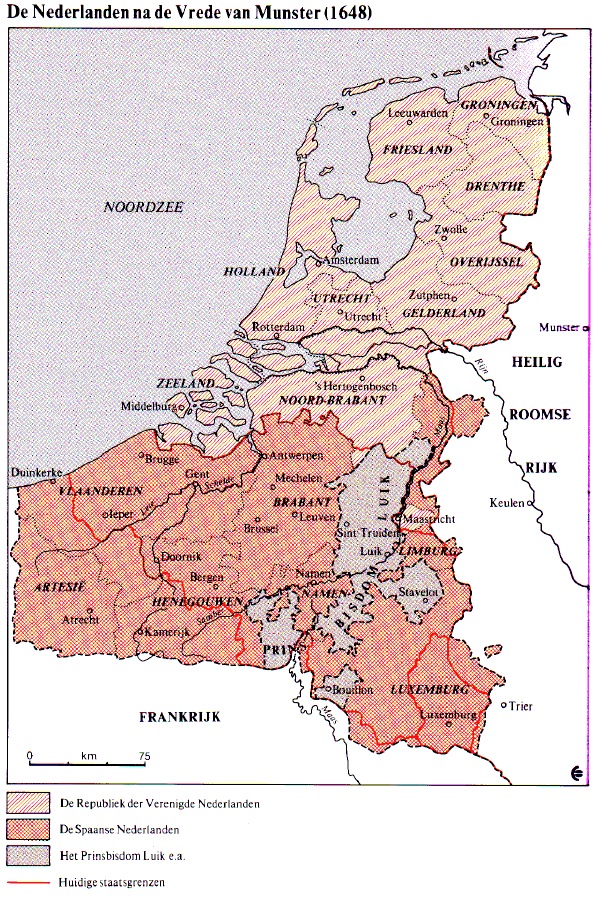 But Spain send a big army and with the help of the Wallon counties who stayed loyal to the Spanish crown the United Netherlands where split again. The Northern Netherlands (today’s Netherlands) remained independent but the Southern Netherlands (today’s Flanders) became back again part of Spain (later Austria). A lot of Southern Dutch intelligentsia, artists, engineers, etc. fled to the free north and helped with building out that new Dutch state that had in the 17th century his golden age with his great trading companies (VOC, WIC) who travelled and discovered the world and formed on several places colonies and trade cities. After the defeat of Napoleon at the Dutch battlegrounds of Waterloo the map of Europe was reformed and the Netherlands were back united! The Southern Dutch people regaled the Dutch King and influences but the French bourgeoisie doesn’t liked the idea that Dutch people get the same rights as them (own universities, own culture, etc.). So in 1830 they revolted and established with the help of the French Empire the French Kingdom of Belgium.
The Flemish movement stood up
Of course the Southern Dutch had tasted freedom during the period 1815-1830 and doesn’t wanted to become back second-class citizens in a unitary French state and they started a cultural movement, at the battlefields of the terrible First World War the movement became a political movement. Always coming up for more rights for the Flemish people but also to become back a part of the Netherlands.
During the thirties, like in the rest of Europe, also in Flanders strong New order movements came up. They grow in the parliament and on the streets.
During the Second World war the Flemish movement collaborated with the Germans. Fighting against communism (like Europe will continue to do until the nighties) but also with the promise that they will have their own independent Flemish state after the war. But capitalism and communism won the war and the Belgium/French bourgeoisie saw her chance to take revenge on the Flemish people who tried to have equal rights and tried to kill the Flemish movement. Hundreds of Flemish activists were killed, lynched, women and girls were raped, activists loosed their civil rights, etc.

But despite the Belgium terror the Flemish movement stood back up! 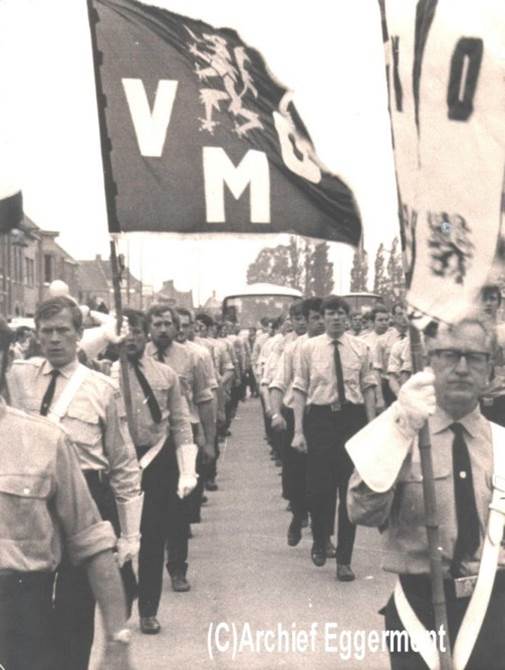 That new after-war Flemish movement was however not ideological based (because it was too hard to say nationalistic things in public) but only based on the rights for Flemish people and the independence of Flanders. More ideological things like New-order solidarism and such things were no longer discussed. Only the organization Were di (kind of precursor of Voorpost) was also ideological active. 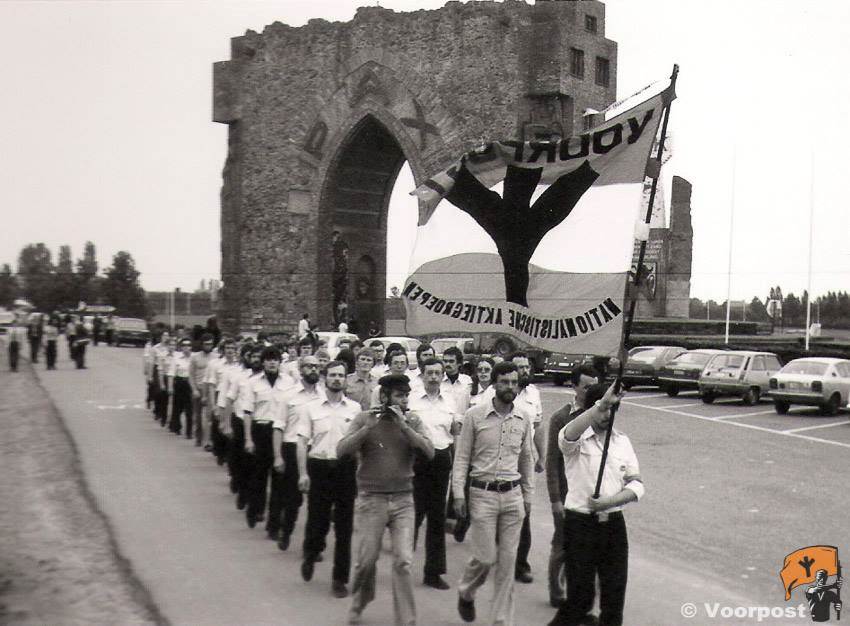 The lack of ideology in the movement and ideological based nationalistic organizations led in the seventies to a radical revolt in the Flemish movement. Some new groups, inspired by the New-Right thinking’s coming from France (Nouvelle Droite) where formed. Groups that have their own specific function in the society like a party, Vlaams Blok (nowday’s Vlaams Belang), a New-Right intellectual group ‘Delta Stichting’, a students organization NSV, and last but not least, an actiongroup, Voorpost. All of them dropped the idea of the soft Flemish (more cultural inspired) movement and formed a radical Flemish movement, striving resolute for an independent Flanders and reunited Netherlands but also for another way of political thinking, resolute against, at that days, the danger of communism and the neoliberal world!